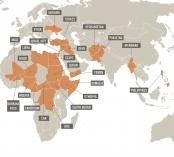 *Please note, this statement is made in an individual capacity and may not reflect the views of all members of the Coalition*

Thanks to the Lantos Commission, the International Committee of the Red Cross, and the American Red Cross for organizing this important briefing—it’s a subject that warrants more attention by Congress.

I am chair of the Safeguarding Health in Conflict Coalition, a group of more than 35 humanitarian organizations, academic centers, health professional associations, and human rights groups that monitor attacks to on and threats to civilian health in conflict; strengthen universal norms of respect for the right to health; demand accountability for perpetrators; and empower providers and civil society groups to be champions for their right to health. Our work brings the voice of the NGOs to international and domestic policy-makers, and we call out perpetrators and demand accountability.

The problem of violence against health care in conflict is a very longstanding one, but only in recent years has it received global attention. For the past five of those years the Coalition has published an annual review of attacks on health care in conflict. Our report can’t be comprehensive as many attacks go unreported. But as you can see from the map from our 2018 report, we found more than 700 documented attacks in 23 countries in 2017. Some of the places where these attacks take place are well known. In Syria, more than 500 attacks have been launched on hospitals since the war began. In Yemen, the Saudi-led coalition has engaged in indiscriminate bombing of urban areas, destroying much of the health system, and the Houthis have also attacked health facilities and personnel.

But it is likely that you haven’t heard of some of the horrific examples of violence against health care that have taken place. For example, according to medical staff accounts, in the Democratic Republic of Congo (DRC) in April 2017, the Bana Mura militia, which is supported by the Congolese army, attacked a hospital in the town of Cinq in the Kasai region near the Angola border, killing at least 90 medical staff and patients, including pregnant women and other civilians. Many people are aware of attacks by Boko Haram on civilians in Nigeria, but few people know that in 2017 the Nigeria Air Force bombed a displaced persons settlement during an MSF vaccination campaign. The attack killed three MSF-contracted water and sanitation workers, six Red Cross volunteers delivering food aid, and at least 90 civilians.

In all of these cases, there have been no adequate investigations, no accountability, and no serious diplomatic actions, including limits on arms sales to the perpetrators.

The Coalition, along with the University of Essex in the UK and my own home institution, the Johns Hopkins Bloomberg School of Public Health, also issued a report this year on the use of counter-terrorism and other laws to criminalize health care to alleged terrorists—laws and practices that are directly contrary to the requirements of international humanitarian and human rights law—as well as medical ethics. All these sources of norms and law hold that every wounded and sick person is entitled to medical care, based on need alone, without regard to affiliation or prior conduct. Further, they all forbid the arrest, prosecution, punishment, or harassment of health professionals for adhering to the duty to offer medical care impartially. Yet many countries, including that United States, have counter-terrorism or related laws that are so sweeping as to render ethically mandated impartial medical care a criminal offense.

After years of complacency, starting in 2012, at the behest of colleagues at the ICRC as well as the Coalition, the international community started to seek to address the problem. In 2012 the World Health Assembly required the WHO to collect and disseminate data on attacks—an initiative that was finally implemented earlier this year. In 2016 the UN Security Council adopted its first-ever resolution on violence against health care, resolution 2286, that reinforced norms and called for very specific actions toward prevention and accountability.

But the Security Council resolution has not been implemented and even the recommendations of the UN Secretary General, setting out specific measures for states to take toward its realization, have never been adopted. There remains a lack of accountability not only for the perpetrators committing the attacks but for the states who have made commitments to prevent attacks and hold perpetrators to account.

What has the United States’ role been in the effort to respect and protect health care from violence in conflict? It was instrumental in pressing for the WHO to implement its own data collection. It supported resolution 2286. It conducted an investigation when its own planes bombed an MSF hospital in Kunduz, resulting in disciplining some of its soldiers. It urged referral of Syria to the ICC for a war crimes prosecution, which was blocked by Russia and China. It supported restrictions of arms sales in South Sudan and supported an arms embargo there—which was not adopted.

But the US has also declined to take action toward protection and respect for health care in conflict, which could have an enormous impact. It has not gotten its own house in order and, in some cases, it has been complicit in violations. That means Congress must act. I suggest four areas where Congress could be very helpful:

​1.Yemen. Yemen is the worst humanitarian crisis in the world. Twenty-two million people, representing 75% of people living there, require aid and yet the major port for entry of aid to reach Yemen has been under assault for many weeks. In its more than 18,000 airstrikes, the Saudi-led coalition has consistently and indiscriminately bombed urban areas, destroying much of the health system, as well as water and sewer facilities, while the Houthi rebels also attack hospitals. As you know, the United States supplies weapons and operational support to the Saudis and United Arab Emirates (UAE) to support the bombing campaign. The Saudis were pressured to limit targets and to set up an investigation mechanism where attacks hit civilians, but these initiatives have largely been a sham. Recently, after a Saudi bombing hit a school bus, killing 40 children, the Saudis at first claimed it was a legitimate military target, only later saying, after international pressure, that it was a mistake.

This year, in section 1290 of the John McCain National Defense Authorization Act, Congress took steps to limit US assistance unless the Saudi-led coalition adhered to international law. It specifically prohibited the use of U.S. funds for in-flight refueling of Saudi and UAE aircraft in Yemen unless the Secretary of State certified that Saudi Arabia and the UAE were taking appropriate measures to redress the humanitarian crisis and demonstrable actions to reduce the risk of harm to civilians and civilian infrastructure in military operations.  Shortly after enactment, a special commission of the UN issued a report finding that in fact the Saudi-led coalition’s indiscriminate bombing may amount to war crimes. The investigators also noted that “there is little evidence of any attempt by the parties to the conflict to minimize civilian casualties.”

Last week Secretary of State Michael Pompeo issued a memo in response to Congress’ requirement that “recently civilian casualty incidents indicate insufficient implementation of reforms and targeting practices.” The memo also asserted that “investigations have not yielded accountability measures.” He nevertheless certified that the coalition was taking appropriate measures.

This cannot be accepted—the certification is not based on the facts found by independent observers and indeed recognized by the Secretary himself. The certification and continued bombing campaign is almost surely likely to bring about more bloodshed and suffering to the Yemeni people. Congress should therefore curtail US military assistance to the Saudi/UAE coalition and block any future US arms sales to either Saudi Arabia or the UAE until the conflict in Yemen has been concluded peacefully through negotiations.

I note, too, that the National Defense Authorization Act also requires the Secretary of Defense to conduct a review to determine whether US Armed Forces or US partners have violated laws or internationally recognized human rights. Congress should engage in oversight of this process.

2. Counter-terrorism and protection of health care. Congress can amend U.S. criminal laws that contain definitions of material support of terrorism to extend to medical care so that there is a specific exclusion for such care. Doing so would not in the least harm national security, as the connection between medical care to an alleged terrorist and a terrorist act is beyond speculative, and would re-affirm values reflected in the Geneva Conventions our country has long embraced. Second, Congress should require the Department of Defense to include in its Law of War manual provisions based on the Additional Protocols to the Geneva Conventions that no person should be punished for providing medical care consistent with obligations under medical ethics (though the United States has not ratified the Additional Protocol, the Law of War Manual adopts many of its provisions). Third, the United States should join with other states to amend UN counter-terrorism frameworks specifically to exclude medical care as an act that may be deemed a form of support for terrorism.

3. Military doctrine and practice. As my colleagues from the ICRC and Red Cross have pointed out, there is a gap in specific guidance and training for US troops regarding practice in the field in such realms as hospital searches and passage of ambulances at checkpoints. After the Kunduz attacks, the Secretary of Defense issued a statement that US troops would respect the work of humanitarian organizations. But the Department of Defense needs to do more:  it needs to have very specific guidance and training for troops on conduct in these complex situations in the field. Through hearings and oversight, there is an opportunity for Congress to achieve this.

4. Syria. Catastrophe is close on the horizon in Syria. Discussions about separating alleged terrorists from civilians in Idlib sounds like a good policy but the history of this war is that Russia and Syria have never distinguished between the two. Civilians have been targeted just as military installations are. Congress needs to press the administration to do whatever it can to protect civilians in Idlib. Additionally, it should press for accountability for the war crimes against health care in Syria. Especially in light of Ambassador Bolton’s remarks on the International Criminal Court last week, there needs to be some clarity of ongoing US support for the International, Impartial and Independent Mechanism to assist in developing evidence for prosecution of war crimes in Syria.

Thank you very much.

[1] This statement is made in an individual capacity and may not reflect the views of all members of the Coalition.