What's Not a Target 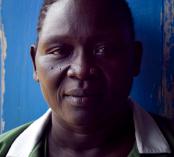 It was really hard for me to get my head around at first—that someone would deliberately harm a health worker. A nurse, a doctor, a midwife. A community health worker delivering polio vaccines. Someone who spent years studying, practicing, sacrificing to save lives.

I mean when I meet a health worker, I’m often tongue-tied. They practically have celebrity status. They’re doing something meaningful with their lives, every day.

Or the facilities they work in.

But from my cubicle and laptop, on social media and across the Internet, I read reports of health workers being harmed, or their facilities or clients attacked, every week. Sometimes more often.

Here are just a few incidents in the past month that I’ve spotted, often because the posts about them include #NotATarget (a hashtag campaign started by the International Committee of the Red Cross, or ICRC, two years ago):

Many more attacks are not reported. And often no perpetrators are named.

Through my work on the Safeguarding Health in Conflict Coalition, I track attacks on health care to help raise awareness of them.

I coedited the coalition’s last two annual reports, which detail attacks on health workers and facilities around the world, and provide recommendations to stop them. Our latest report, Impunity Must End, shows attacks happened in 23 countries in conflict in 2016. These included:

For five years the coalition, made up of more than 30 universities and organizations around the world, has advocated at the global level and with the United Nations and the World Health Organization (WHO) to take action to protect health workers and end attacks against them, including collecting data. Since then, we and others have welcomed several positive steps, most importantly:

But it’s not enough.

The Geneva Conventions already officially protect civilians who are not taking part in hostilities, including health workers and humanitarian aid workers. Yet the WHO reports that 979 health workers were injured or killed in attacks in 2016.

And as the violence continues, so does its impact. Earlier this week, the WHO announced 500,000 suspected cholera cases in Yemen this year, and more than 2,000 related deaths. The WHO says 99% of people who can access treatment can survive. But only 50% of health facilities in Yemen are even functional due to the ongoing conflict and the near total collapse of the country's health system.

What more can we do?

The Security Council needs to implement its resolution (it’s done practically nothing to enforce it). The people behind attacks need to be held responsible. UN member states need to share what they’re doing to prevent more attacks from occurring. The Safeguarding Health in Conflict Coalitions and our allies will continue to push for these actions.

Of course, to most of us, health workers are “not a target.” We shouldn’t shoot them. We shouldn’t attack the buildings where they work, or the vehicles that rush them to the sick. Of course not. They’re supposed to save lives, not fear for their own.

Because how can health workers save lives if they’re not safe? If they’re hiding? Running? Gone?

We all need them. We also need hospitals to be safe places of healing.

You can help. Follow @SafeguardingHC and share the coalition’s messages. Sign the World Humanitarian Day petition and tell our world leaders they must do everything in their power to protect civilians in conflict, including health workers.

This post was originally published on IntraHealth International's VITAL blog. IntraHealth believes everyone everywhere deserves access to the care they need to thrive, including people living in countries in conflict. It’s also working to keep health workers safe and in the places where they’re needed most. IntraHealth shares the secretariat of the Safeguarding Health in Conflict Coalition with the Center for Public Health and Human Rights at the Johns Hopkins Bloomberg School of Public Health.