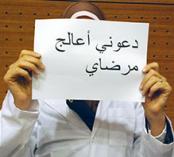 GulNaz, a health worker in Pakistan, is one of countless women on the dangerous front lines of health care in conflict situations. Her sister-in-law and niece have already been murdered for administering polio vaccines, and GulNaz herself faces daily threats. Sixty-three vaccinators and security personnel have been killed in the last two years.

In Syria, a physician we’ll call Dr. Nour has survived five attacks on the field hospital where she works. “Sometimes I lose hope,” she admits. “I think that death is very near to me.” More than 600 health workers have been killed since the conflict began, and more than 220 health facilities have been targeted.

But neither woman is giving up.

Around the world, attacks on health workers have reached new heights. Many go unreported, but the International Committee of the Red Cross was able to confirm 1,809 incidents of violence against health workers, patients, ambulances, or medical facilities in 23 countries in 2012 and 2013.

This violence affects women disproportionately
Women are the ones most affected by attacks on health care. Globally the vast majority of health workers are women—and in many countries, more than 75% of the health workforce is female. Attacks also impede service delivery and lead to chronic health workforce shortages and weakened public health systems.

In Liberia, for example, the civil war destroyed 80% percent of the health system, leaving the country unable to cope with the recent Ebola outbreak. In Syria, the decimated health system allowed polio to reemerge after it had been eradicated. And in the ongoing conflict in the eastern part of the Democratic Republic of the Congo, health workers have fled for their lives and facilities have been looted; pregnant women suffer the consequences of reduced access to services, and the country has one of the highest maternal death rates in the world.

Women and girls also suffer disproportionately from violent conflict itself. But there is some hope.

Many organizations are working to protect health in conflict
The Safeguarding Health in Conflict Coalition is a group of 34 organizations who share a commitment to the protection of health workers, services, and infrastructure from violence. After intensive advocacy, “we are starting to get the momentum and mechanisms we need to tackle the problem,” says Leonard Rubenstein, chair of the coalition.

In December, the UN General Assembly passed a resolution that recognizes for the first time the severity of attacks on health workers, facilities, and patients, and urges States to take immediate steps to ensure health workers are protected from violence. Advocates can now use this resolution to persuade countries and international bodies to make the protection of health workers a top global health priority.

On March 26, Rubenstein and other coalition members will take part in a session on Protection of Health Workers in Conflict at the annual conference of the Consortium of Universities for Global Health (CUGH). Participants will review the scope of the problem, its impacts on health systems, initiatives to build a body of evidence, and strategies for increased protection through humanitarian and human rights approaches.

Celebrating health workers who help women around the world
Brave female health workers have dedicated their lives to helping communities in need despite the risks. These women deserve our protection. “Let me treat my patients,” pleads Dr. Nour in Syria. This year on International Women’s Day, let’s pledge to #MakeItHappen.

Photo courtesy of Simran Sachdev/Physicians for Human Rights. Dr. Nour (not her real name) holds a sign that says “Let me treat my patients.” Read the full interview.

Sarah Dwyer is a communications manager at IntraHealth International, which serves as secretariat of the Safeguarding Health in Conflict Coalition along with the Center for Public Health and Human Rights at the Johns Hopkins Bloomberg School of Public Health.